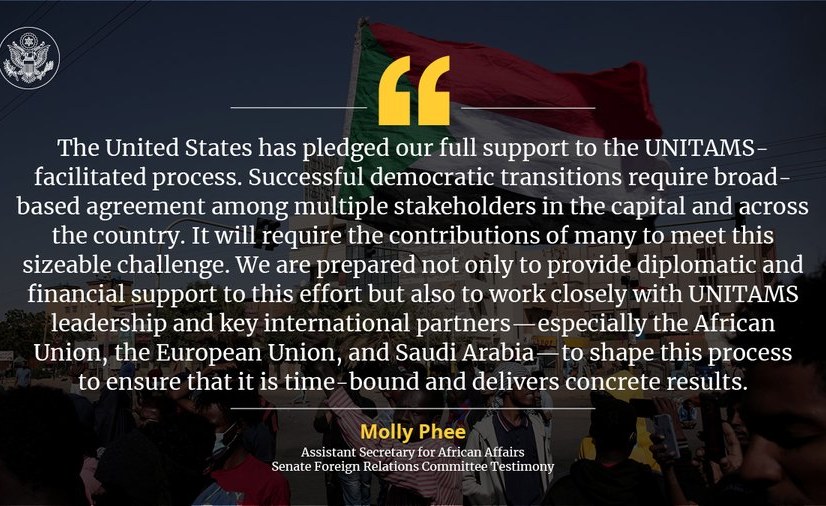 Mr. Chairman, Member at Large, allow me to begin by thanking the committee for your interest and longstanding support for a successful transition from authoritarian to civilian rule in Sudan. We share your concern about the increasingly volatile situation and the risk of regression. Since the fall of Bashir’s dictatorship in 2019, the United States and our international partners have worked to support the people of Sudan in their extraordinary efforts to build democracy. We have worked closely with this Committee and the Congress to advance this shared priority.

It has always been an ambitious undertaking. After 30 years of Islamist military dictatorship and recurrent internal conflicts, the Sudanese face a legacy marked by a military-dominated economy now threatened with collapse, a civil service denuded following repeated political purges, a political system fractured by military intervention to shatter and divide, and the generational damage done to the country’s historical marginalized is such as Darfur which left hundreds of thousands dead, millions displaced and the nation split in two. Even as we salute the transitional government’s progress in repealing repressive legislation that restricted human rights, opening space for civil society and political activism, ending support from decades of government to terrorist organizations and engagement in free-market economic reforms, we were keenly aware of the immense structural problems facing the transition, compounded by internal power struggles and external detractors.

We were also inspired by the remarkable and resilient civil resistance movement, which achieved the historic overthrow of Bashir and led the security forces to agree in 2019 on a transitional civil-military partnership and a path towards the elections known as the Constitutional Declaration. Sudanese stakeholders also reached a landmark transitional power-sharing agreement for historically marginalized regions known as the 2020 Juba Peace Agreement. These two documents offered the promise of finally achieving democracy and thus peace. for Sudan. We were proud to work with Congress and our international partners to leverage our diplomacy and assistance to support this transition, which holds so much promise for the Sudanese people, the region and the continent.

On October 25, as we all know, the Sudanese security services turned the civil-military partnership upside down when they betrayed the transition and the people of Sudan by directly seizing power – overthrowing the prime minister and the cabinet and undermining the confidence of the Sudanese people in the promise of the transition and the goodwill of the international community. The November 21 political agreement that restored Prime Minister Hamdok to office failed because it did not include key civilian stakeholders and did not permanently end military repression and violence against civil protests. Prime Minister Hamdok’s decision to step down on January 2 shocked the Sudanese political system and prompted civilian and military actors to seek help from the international community to save the transition.

Given the repeated disturbing actions of the Sudanese security services, the people of Sudan have concluded that it is no longer realistic to view Sudan’s transition as a partnership with the military. Declaration and the Juba Peace Agreement to ensure that these policy documents reflect the needs of the present moment. To do this, Sudanese stakeholders are demanding a new military-civilian relationship, one that redefines and resizes the role of the military from partner in a transitional government to participant in the transitional process. For our part, we have made it clear that we support civilians in achieving this ambition and will act to facilitate this change.

Sudanese stakeholders from all military and political backgrounds tell us that they are seeking to return to a transition, but would welcome international support to help them find common ground. Sudan-led political process, the international community has begun to work actively with Sudanese civilian stakeholders to build consensus around a common vision for reform of the constitutional declaration in order to reshape the path of civilian transition, d assign an appropriate participatory role to the security services, set up a Legislative Council and lay the necessary foundations to advance elections, economic reforms, accountability and the implementation of the Juba Peace Agreement.

Mandated by the Security Council to use its good offices in favor of the transition, UNITAMS will be in the lead but not alone. The United States, together with Friends of Sudan (Canada, Egypt, Ethiopia, France, Finland, Germany, Italy, Kuwait, Netherlands, Norway, Qatar, Saudi Arabia, Spain, Sweden, the United Arab Emirates, the United Kingdom, the United States, the African Union, the European Union, the League of Arab States and the United Nations) – pledged our full support for the process facilitated by the UNITAMS. We did so with full recognition of the difficult work facing the Sudanese and their regional and international partners. Successful democratic transitions require broad agreement among multiple stakeholders in the capital and across the country. It will take the contribution of many people to meet this daunting challenge. We stand ready not only to provide diplomatic and financial support to this effort, but also to work closely with UNITAMS leadership and key international partners – in particular the African Union, European Union and Saudi Arabia. – to shape this process to ensure that it is time-bound and produces concrete results.

During my two visits to Sudan, civilian and military actors expressed a strong desire to find a way out of the quagmire that has plagued the country since the October 25 military coup. Although they pledged to support the political process facilitated by UNITAMS, these promises must be honored by deeds, in particular on the part of the security services. On behalf of the United States, I have made it clear that the continuing reprehensible pattern of violence against peaceful protesters that the security services have engaged in since October 25 must end. The same goes for the use of detentions of civil society activists, media shutdowns, attacks on medical facilities and communication blackouts. These actions perpetuate a cycle of violence that hardens positions and makes it all the more difficult to agree on a political path forward.

We have already worked with our partners in the international community to impose significant costs on the Sudanese military regime for its actions on October 25. The pause in bilateral and multilateral government aid and debt relief has left the country’s finances in a precarious state, unable to meet its current financial obligations. We have been clear that the only path to the restoration of international financial assistance is based on an end to violence and the restoration of democratic transition.

At the same time, as I have made clear to military leaders, we stand ready, together with our partners, to apply additional costs if the current pattern of violence continues. We are currently examining the full range of traditional and non-traditional tools at our disposal in order to further reduce the funds available to the Sudanese military regime, isolate its military-controlled companies and increase reputational risk for anyone who chooses to continue to engage in “business as usual” with the Sudanese security services and their economic enterprises. Smart use of this leverage will enable us to push for behavioral change on the part of security sector leaders and could contribute to establishing the military-civilian balance of power in Sudan, a prerequisite to the long-term success of its democracy.

Get the latest African news straight to your inbox

We need to confirm your email address.

To complete the process, please follow the instructions in the email we just sent you.

We applaud Sudanese from all walks of life who continue to take to the streets at the risk of their lives to demand civilian rule and democracy. Since 2018, they have been the vanguard and heroes of the Sudanese revolution. As the UNITAMS-facilitated dialogue progresses, we will provide concrete support to enable the Sudanese people and civil society organizations to channel their determination to reshape a new civil path to democracy that includes political reforms and economic essentials to achieve the freedom objectives of the Revolution. , peace and justice.

Three decades of military rule under Bashir have failed to bring stability or prosperity to Sudan. The people of Sudan have made it clear, over four years of sustained activism and protest, that they will not allow their demands for civilian rule and democracy to be ignored, sidelined or co-opted. Sudanese history undeniably demonstrates that only a democratic state can produce lasting peace. It is high time for Sudanese military leaders to recognize this reality, stop resorting to violence and engage constructively in a civilian transition to democracy. The United States and the international community share the aspirations of the Sudanese people to restore and advance their transition, and we will continue to work with our regional and international partners toward this goal. We will continue to seek your help and commitment to help the people of Sudan. realize the full potential of their courageous and historic revolution.

thank you very much