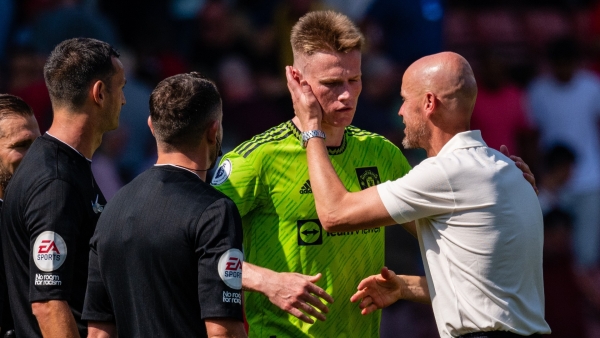 Erik ten Hag is confident Cristiano Ronaldo will find his groove after scoring his 700th club goal – and his first of the 2022-23 Premier League season – in Sunday’s 2-1 win at Everton.

Ronaldo had endured a frustrating campaign before his exit at Goodison Park, a ground where he had never scored a goal in the Premier League, but proved decisive after entering the fray in the first half.

Antony canceled out Alex Iwobi’s opener before Ronaldo replaced the injured Anthony Martial and the 37-year-old quickly made his mark by firing a left-footed finish past Jordan Pickford.

The strike was Ronaldo’s 700th in club football and his 144th in two spells at Old Trafford, and helped United bounce back from last week’s derby against Manchester City.

Speaking at a post-match press conference, Ten Hag praised Ronaldo for his landmark and backed him to reach a rich vein of form in the coming weeks.

“I congratulate him on this performance and I’m also happy that it’s his first goal this season in the Premier League. He had to wait and I’m sure there will be more goals.

“I think every player needs that, even when you’re the best in the world, you need that, you need the goals.

“I have worked with many scorers, especially them, they need goals every season to have this feeling, to have their intuition confirmed.

“Once they have goals, they go into the flow and the games get easier. That will happen with him too.”

United had lost eight of their last 10 away league games before their trip to Merseyside – including last Sunday’s dismal defeat at the Etihad Stadium, and Ten Hag was pleased with the improvements displayed.

“First of all, criticism is normal when you have a defeat, especially in a big game, in a derby, so we have to deal with that and you learn lessons,” added Ten Hag.

“Right now we’re collecting the points, it’s not looking at the board, we have to win every game – that’s our goal.

“You see in this match, the spirit is really good in the team – it’s not just the 11 players.

“Again a substitute comes in and scores a goal, you see Victor Lindelof, Scott McTominay and Raphael Varane come in, so we’re using more than 11 players and I’m happy with that process.”

“He’s never been in this situation before, but the way he works and trains, it’s just amazing,” De Gea told BT Sport. “It’s not easy times for him, but he’s shown he’s a great player.”

With De Gea’s contract with United expiring at the end of the season – although the club have an option for a further year – the Spaniard has also revealed he would like to commit his future to the club.

“I’m just very focused on the games, helping the team as much as I can,” he added. “Of course I would love to be here for more years, so let’s see what happens in the future. I’m really, really happy here.”