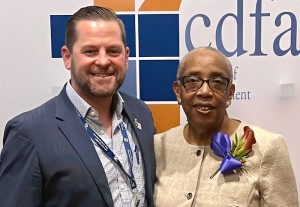 The Council of Development Finance Agencies presented Louisiana Assistant Secretary of Economic Development Brenda Guess with her 2022 Lifetime Achievement Award on November 3 during the National Summit on Financing for Development.

The CDFA annually recognizes individuals whose contributions to the development finance industry have had a lasting impact on the way programs are operated, managed and administered.

A 35-year veteran of LED, Guess was named assistant secretary in January 2022, primarily responsible for guiding agency programs that grow Louisiana’s small business sector. Previously, she served as Director and Manager of Business Incentive Services, where she administered a variety of state programs developed for the creation, retention, and expansion of Louisiana businesses and industries. Guess holds a master’s degree in public administration and a bachelor’s degree in marketing from Southern University.

“I am overwhelmed with gratitude to have been selected to receive the CDFA Lifetime Achievement Award,” Guess said. “As a ‘recovering banker’, as I often say, I came to Louisiana Economic Development in 1987 and discovered a passion for building communities through job creation and economic growth. I thank LED for giving me the many opportunities over the years to continue to grow and for sharing this honor with my colleagues, whose constant support and inspiration sustain me.

State support for small businesses increased significantly after Governor John Bel Edwards took office in 2016. It will expand further in 2022 with the injection of at least $74.2 million in government funding. ‘U.S. Treasury State Small Business Credit Initiative. The LED has been designated as the state agency responsible for overseeing the disbursement of these federal funds, which are designed to provide credit support and investments to small businesses, as well as to increase access to capital for business entities. socially and economically disadvantaged and underserved communities.

“We are extremely proud of Assistant Secretary Guess and the lasting impact she has had on Louisiana’s business community,” said LED Secretary Don Pierson. “The CDFA could not have chosen a more dedicated official for this distinguished recognition. I know Brenda will continue to make a difference in the months ahead by leading the administration of our SSBCI team and partnering with small business owners and their communities to grow entrepreneurship in Louisiana.