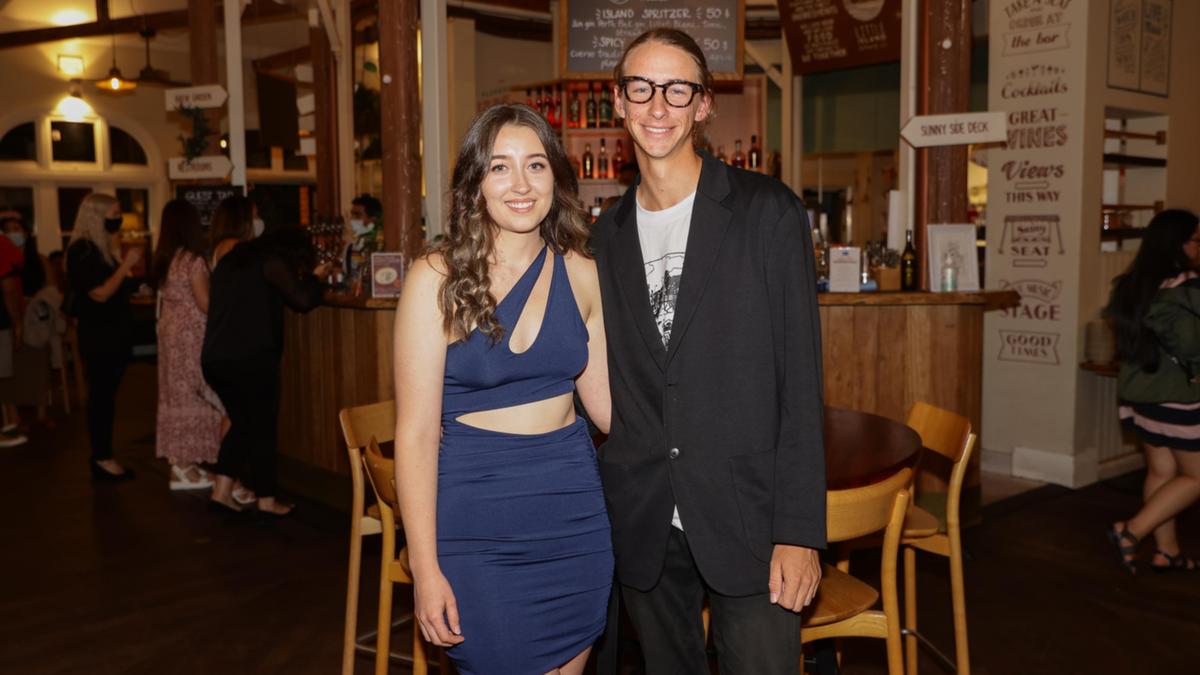 Blind Date: Financial assistant Ashlynn and Luca who work in information management soaked up the sight

My supervisor at work told me about Blind Date and then convinced me to do it. I was really excited because I come from a small town. I’m not really dating anyone and I’ve never done anything like this before.

By the time the night came, I was really nervous. I was pretty happy to be the first one there because I could see who was coming in. Once seated, I calmed down and had a drink there. I felt much more comfortable.

I was probably waiting 10 minutes before Luca arrived. It was really nice to meet him. I feel like it was a kind of atmosphere between friends.

We talked about our lives and what we did growing up. I lived in Exmouth for 17 years. It was really cool growing up there.

We talked about different achievements. He won many awards playing tennis in different states and I swam a lot and did the same in areas like Pilbara and Gascoyne. I no longer swim competitively. I mainly go to the beach and sometimes I go surfing.

The way he described his daily life was very busy. Full of training, studying, tennis practice, he’s in a band, so it looks like he has a full life. It is quite interesting.

He said he played guitar and other musical instruments. Before, I played the guitar, but I stopped.

At the end of the night I told him I had to go to Busselton early in the morning and he said he had his mother’s birthday in the morning too, so we finished and said goodbye. We exchanged our numbers. He messaged me and then I messaged him saying I would like to hang out but probably just as friends. He said he felt more, but he was fine.

This is definitely an experience people should have once in a lifetime. Get out of their comfort zone. It took me out of my comfort zone and brought me back to dating.

I had never had a blind date before, but I was less nervous than if it was a regular date where you knew who you were going to meet. I guess I didn’t know what to expect, so I had no reason to be nervous.

We had booked The Island, in the middle of Elizabeth Quay. When I arrived I was shown to the table and Ashlynn was already there. We introduced ourselves and started chatting. We touched on all the major areas like work, family, hobbies just like you do on a first date.

She told me she was from Exmouth and she liked to surf. It’s a strange thing to say, but she didn’t sound like a peasant. I can’t really determine why I thought that though. Now his family lives in Busselton, I think.

It was a good time and it was really easy to talk to him, but we didn’t have much in common. She loves water and I’m not a water person. I live literally two blocks from the ocean but I never go there. I watch it, but I’m never going to swim.

I am really passionate about music. In my free time, I like to write and produce music. It’s somewhere between soft rock and folk music. I also do a few gigs. I don’t think going to concerts came during the date.

The biggest difference between this and a normal date is that there were a lot more questions to get to know you. It was probably above average compared to other dates I’ve been on. I think it’s just because we’re kind of connected on a conversational level.

We had been there for a few hours and we both had big days the next morning, so we were done. I thought it was a nice moment. We exchanged numbers and we sent a few texts after the date and I left her in her neighborhood if she still wants to hang out.