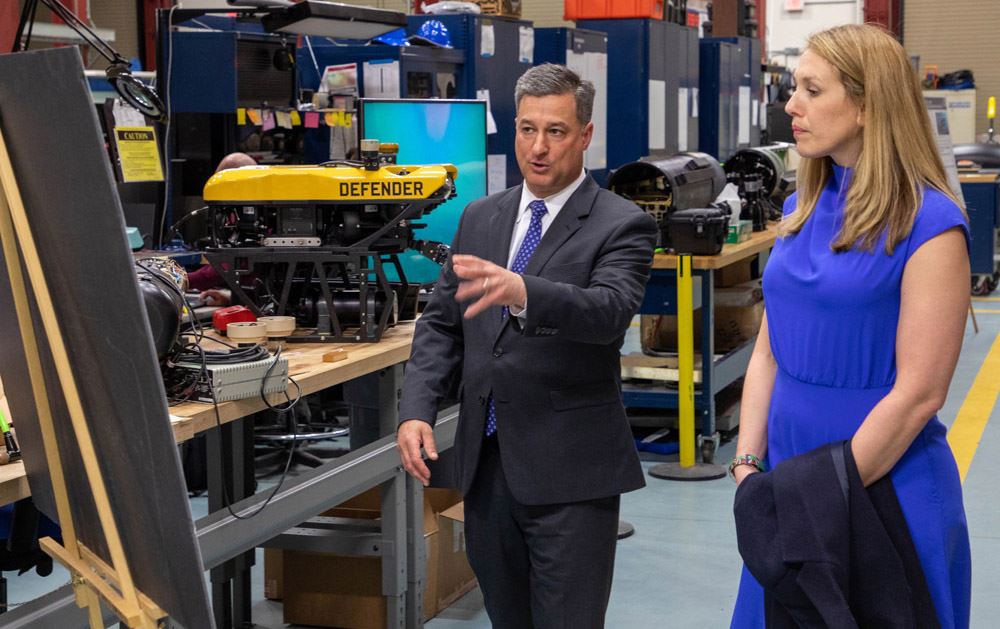 Naval Undersea Warfare Center (NUWC) Division Newport hosted Assistant Secretary of the Navy for Energy, Installations, and Environment Meredith Berger May 5 for tours and a series of awards presentations.

Berger opened his visit by presenting the Newport Division with the Chief of Naval Operations Award for Safety Ashore in the Large Non-Industrial Category – the second straight win for the warfare center.

“I am honored to have the opportunity to be here to present the NOC Safety Award,” said Berger. “This award not only shows that you are doing the job, but that you are doing it in a safe way. Thank you for setting a good example and continuing to set the standard.

The award, for fiscal year 2021, which runs October 1 through September 30, recognizes the overall quality of the many innovative programs managed by the Newport Division Occupational Safety and Health Branch, including compliance health and safety standards and proactive accident prevention efforts.

“When it comes time for execution reviews, ours always run smoothly,” said Newport Division Commander Capt. Chad Hennings. “This is a reflection on the great work you all do.”

Two staff awards were also presented, the first of which was a Meritorious Civil Service Award for Project and Design Engineer/Architect to retired Infrastructure Division employee John DiMaio. It is the third highest honorary civilian award given by the US Navy.

DiMaio, who retired in December 2021, was a project and design engineer and resident architect for the Newport Division for 18 years. His expertise and pride of ownership have been instrumental in the successful design and execution of dozens of facility renovation projects.

The second personal award was the Quarter Sailor’s Honors for Petty Officer 2nd Class Brody Costantini, an Information Systems Technician (Submarines). Costantini was recognized for his superior performance in performing his duties as a member of the test team within the Department of Electromagnetic Underwater Warfare Systems.

“Congratulations to everyone who received awards,” Berger said. “I enjoyed spending time with everyone and learning about all you have accomplished here at NUWC Division Newport.”

In addition to the awards presentations, Berger also had the opportunity to tour a number of Newport Division facilities that relate to his role as ASN for EIE. She is responsible for oversight and policy of Navy and Marine Corps energy and climate resilience; maintaining, restoring and modernizing infrastructure; military construction; the acquisition, use and disposal of real estate and facilities; environmental protection, planning, restoration and conservation of natural resources; and occupational safety and health.

Stops on the tour included the Unmanned Underwater Vehicle (UUV) Laboratory, as well as the Underwater Ocean Interface Test Facilities.

This includes maintaining continuous passive acoustic monitoring on Navy instrumented ranges, as well as developing and implementing methods to understand the impact of Navy activities on marine species.

“Much of our work is basic research to understand the biology and behavior of animals in rangelands,” Watwood said.

This includes maintaining continuous passive acoustic monitoring on Navy instrumented ranges, as well as developing and implementing methods to understand the impact of Navy activities on marine species.

“Understanding the dynamic between environmental considerations and mission readiness is imperative for the Navy to achieve mission success,” Berger said.

“We’ve been making torpedoes here since the 1850s, so it’s a complete evolution of the system here in Newport,” explained Chris DelMastro, Head of Underwater Warfare Platforms and Integration Department. payload.

DelMastro also led a tour of the UUV lab, outlining some of the projects underway. These projects included mid- to long-term UUV technology efforts.

“We have leveraged the best from academia and industry, as well as the brightest minds in government to advance the state of the art in UUV,” DelMastro said. “The Navy has made a lot of investments over the years and we are stewards of those investments to transfer capabilities to the fleet.”

Join our team! NUWC Division Newport, one of Rhode Island’s 20 largest employers, employs a diverse, highly skilled, educated, and skilled workforce. We are always looking for engineers, scientists and other STEM professionals, as well as talented experts in business, finance, logistics and other support services who want to be at the forefront of underwater research and development. Please connect with NUWC Division Newport Recruiting on this site- https://www.navsea.navy.mil/Home/Warfare-Centers/NUWC-Newport/Career-Opportunities/ and follow us on LinkedIn @NUWC-Newport and on Facebook @NUWCNewport.