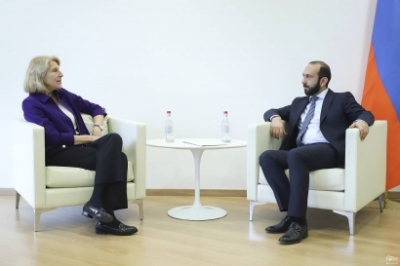 During the meeting, the parties discussed bilateral relations between Armenia and the United States based on the shared values ​​of democracy, human rights and the rule of law, as well as prospects expanding cooperation in areas of mutual interest.

Stressing the importance of the positive dynamics of mutual visits and official contacts, Mirzoyan mentioned with satisfaction the visit of the Armenian delegation to the United States in May this year, the meetings at that time and the renewal of the work of the Armenia-US strategic dialogue. The parties also discussed issues regarding regional security and stability.

Mirzoyan informed his interlocutor about the activities of the Armenian-Azerbaijani Commission for Demarcation and Border Security, as well as current developments in unblocking economic ties and transport communications in the region.

Turning to the settlement of the Karabakh conflict, the Armenian Foreign Minister referred to the need to fully resume peace negotiations in the format of the OSCE Minsk Group Co-Chairs aimed at a comprehensive and lasting settlement of the conflict, and underlined the efforts of the United States as a co-chairing country in this regard. He also presented the humanitarian issues resulting from the Azerbaijani aggression against Artsakh in 2020, in particular Mirzoyan mentioned the immediate release and repatriation of Armenian prisoners of war and civilians detained in Azerbaijan, the preservation of cultural and religious heritage Armenian in the territories taken over by Azerbaijan as a result of the war.

The Armenian Foreign Minister also presented developments around the normalization process between Armenia and Turkey.

The need to take concrete steps towards settlement was noted.

Azerbaijani Foreign Minister and US Undersecretary of State discuss post-war…